After 2 weeks in Northern California the first week of January i will be playing for first time in L.A. with an incredible band backing me up!!

Possibly one of the greatest blues guitarists in the world and longtime member of Rick Estrin and the Nightcats, he has been dubbed «The Heavyweight Champion Of The Guitar» and you will see why. The guy is phenomenal! Kid is also becoming one of the most prolific session producers.

Famed bassist from BB King’s original recording of «The Thrill Is Gone» will be backing the band the entire weekend! He is also known for recording and or touring extensively with Aretha Franklin, Freddie King, King Curtis, Mike Bloomfield, Otis Rush and hundreds more! This is a reason alone to come out!

You just saw him last week masterfully backing up Kirk Fletcher. He’s spent about a dozen years drumming for Rod Piazza & The MIghty Flyers and he’s one of the most in demand drummers around. He will light a fire this whole weekend!

Also the Blues Harmonica Legend, Kim Wilson, will sit in with us for his Birthday Bash on Sunday.

ON SUNDAY ONLY in Long Beach we will be celebrating Fabulous Thunderbirds’ frontman, Kim Wilson’s birthday! This is one of the greatest living blues harmonica legends and he is going to sit in for a bunch of tunes. The word is out and this is going to be super packed.

I highly-recommend getting tickets to the show in advance as the VIP seating is already selling out.

You can get tickets to this at CADILLACZACKPRESENTS.COM 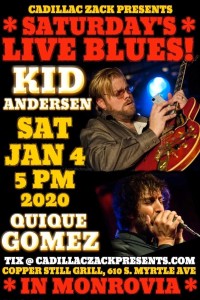 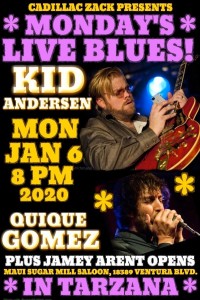 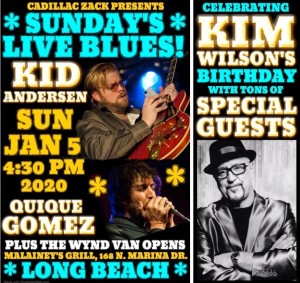